Zoo Negara Malaysia, Selangor – A place to meet the Giant Panda in Malaysia

Zoo Negara Malaysia is a well known Zoo in Malaysia which is strategically located 5Km from city of Kuala Lumpur. Here you not only can find many different animals of Malaysia, but also animals from the safari, arctics and china, with total of more than 400 species of mammals, birds, reptiles, amphibians and fish. It is famous for its Giant Panda Conservation Center. The creative wire mesh artwork beside the parking bay of Zoo Negara. Free Admission for kids below 36 months and disable with valid OKU card. The souvenir shop beside the entrance. You can buy limited edition souvenir such as hats, keychains and stuff animals. Grab the chance to take memorable photographs at their photo booths. Professional photo service is available.

Zoo Negara Malaysia envisioned to be one of the world’s premier zoological park and aquaria dedicated to conservation, recreation, education, training and research of various animal and plant species.

There is various attractions within the Zoo Negara compound. The Map of Zoo Negara and the direction signage.

The Zoo is fill with trees and foliage that mimics the natural habitat the animals stay. The open lake with an island in the Zoo where many free roaming stork lives.

There are many mammals, birds, reptiles, amphibians and fish around the Zoo. Walking around the Zoo Negara will take around 3 to 5 hours. You may need the whole day to visit and learn every details of all the animals in the Zoo. Say hi to the furry, black and white friends, Xing Xing and Liang Liang in the air conditioned bamboo-themed Giant Panda Conservation Center and see the very first Giant Pandas in Malaysia. You can watch how these bamboo eaters spend their time in their spacious enclosure.

Giant Pandas have always been regarded as symbols of peace throughout China’s history. They have also been presented as diplomatic gifts to foster good relations between China and other nations. However, in 1984, due to the declining number of Giant Pandas, these bears would only be loaned to host countries for 10 years. China channels more than half of the conservation fee into efforts to protect the Giant Panda and its habitat. The Giant Panda was once widespread throughout southern and eastern China, Myanmar and northern Vietnam. Expanding human population and rapid development has caused the Giant Panda’s habitat to be limited to 29 patches of fragmented mountain forests in the Sichuan, Shaanxi and Gansu provinces.

According to a 2004 statistic, the current population of Giant Panda is fewer than 1600 in the wild. This animal is the rarest member of the bear family and among the world’s most endangered animals. Giant Panda do eat most of the time.

Oddly enough, there are no historical records that show exactly where the word ‘panda’ originated from. It is believed that the word ‘panda’ came from the Nepali word “poonya” which means ‘bamboo eater’. Giant Panda can stand up to reach higher.

The pair of Giant Panda in the Giant Panda Conservation Center is named Xing Xing and Liang Liang (formerly known as Fu Wa and Feng Yi). Both are born in Wolong on 23th August 2006. Both were the panda representative for the 2008 Beijing Olympics.

The pair of Giant Panda represents peace and a symbol diplomatic relationship between China and Malaysia for 40 years. Zoo Negara Malaysia in Kuala Lumpur became a Giant Panda Zoo on 1st May 2014. 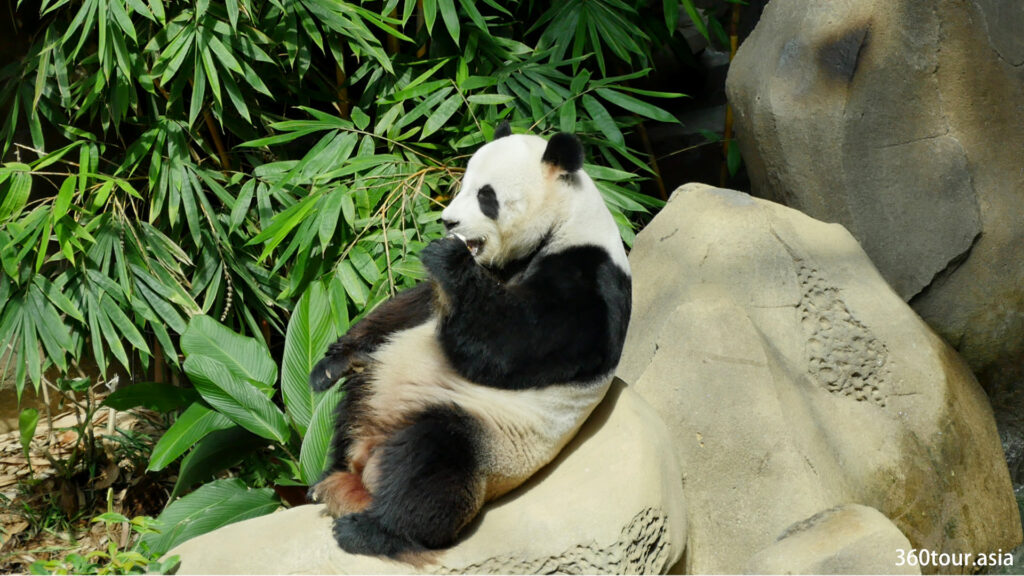 Relaxing Panda on a rock beside the artificial waterfall. The White Bengal Tiger can be found in Tropical forests, Mangrove swamps and moist jungle from India, Nepal, Bhutan and Bangladesh. The White Bengal Tiger is an endangered species, threaten by poaching and habitat loss. These tigers are not true albino but simply have less dark pigment in its coat. They have blue colored eyes. The White Rhinoceros originates from Eastern and Southern Africa; Northern Savannahs of Central Africa. They are near threatened species due to hunting, wildlife trade and loss of habitat. Their lifespan is around 40-50 years.

The White Rhinoceros is the largest species of rhinoceros and second largest land mammal. Its horn is made of keratin, this is the same stuff that makes up your hair and nails. The Zebra is originated from Savannah of Eastern and Southern Africa. They live for 20-25 years and eats grasses, leaves and shrubs.

The Zebra also known as the plains Zebra or Burchell’s Zebra. It is the most abundant of three species of Zebra. It had black coat with white stripes. The stripes are unique to each individual. The Capybara of Zoo Negara Malaysia.

Capybara originated from South America. Their habitat is in dense vegetation surrounding freshwater resources. They feed on aquatic plants and grasses.

They are the largest rodent in the world and they are adapted to a semi-aquatic lifestyle. The male Capybara has a gland on top of their snout that is used to mark their territory. The name ‘capybara’ means ‘master of the grasses’, in the language of the Guarani Indians. The Emu is originated from Australia, present in Forest and severe desert. They can live for 10 to 20 years. They have Knife-like nail on their toes which is used to kick away predators. They are also good swimmers.

The other animals in the Zoo The Porcupine in Zoo Negara Malaysia. The giraffe in Zoo Negara Malaysia. There is many more animals that you can see in Zoo Negara Malaysia. Don’t forget to bring your friends and family to this zoo for a fun, entertaining and educational visit.