Meaning of ‘Darul Hana’ : Darul Hana in Arabic means ‘Home to Peace and Tranquillity’. Historically Sarawak’s (historically Kuching area) full name was “Sarawak Darul Hana” during the era under Brunei Sultanate. It was later renamed as Kuching during the Brooke era.

Function : A pedestrian connection connecting Northern and Southern part of Kuching City, which have many historical buildings and landmarks along the Sarawak River. It also allows pedestrian access from Kuching Riverfront to Fort Margherita and its Brooke Gallery across the river, and from the riverside villages to the nearest shopping centers across the river. The elevated nature of suspension bridge allow ships and boats to use the Sarawak river without interference as long as they are within the vertical height clearance limit. The bridge itself forms an iconic modern landmark structure that complement the Modern looking State Legislative Assembly building (DUN) and the amazing musical fountain water features.

There are certain rules and regulation been stated at the entrance for all visitors and user of the bridge. It is made clear to ensure the safety and convenience while using the bridge. 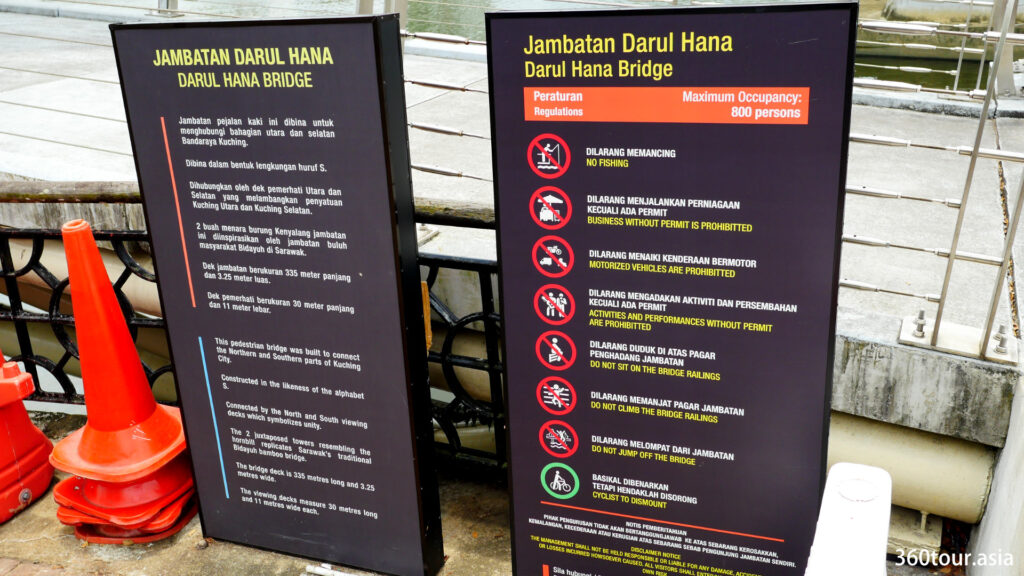 The inscription on the panel:

This pedestrian bridge was build to connect the Northern and Southern parts of Kuching City. Constructed in the likeness of alphabet S. Connected by the North and South viewing decks which symbolizes unity.

Disclaimer Notice: The management shall not be held responsible or liable for any damage, accidental injury or losses incurred howsoever caused. All visitors shall enter/use at own risk.

Before the Bridge been constructed

The Heritage site along Kuching waterfront had long been split by wide and deep Sarawak River. The Kuching City south side holds the famous Kuching waterfront with many old streets and several significant heritage during the Brooke era including the square tower, old court house and the old post office and police station. The other side of the river (The Kuching North) however holds the Major fort of the Brooke administrative era including the Astana and Fort Margarita. In the past, visitors had to use local boat service to cross the river. There is several boat ride across the Sarawak River. Some trips may pass below the bridge.

The Sarawak River was once a busy river with many commercial shipping in the past with historically there is a busy dock along the river that allows the shipments of goods from the sea and inland. Even currently the river is still busy with small cargo ships, tow boats, small cruise ship and passenger boat taxis.

It was a long dream to build a bridge across the Sarawak River, however there were many obstacles while planning to build one bridge. A bridge that does not interfere the busy shipping route of Sarawak river and yet becoming a unique entity that unite both side of the river without major modification and destruction on the historic and iconic structure of both side of the banks.

The Design of Darul Hana Bridge

Main support : Two 50 meters high A shaped cable-stayed tower with 48 degree inclination, with each facing opposite direction. Both tower have a lower viewing deck that acts as a counterweight to the tower.

The ‘S’ shaped gentle crooked cable-stayed bridge: The walkway curvature is formed and suspended by cable on two opposite inclined tower. The cable distribution is based on the harp or parallel design. Its elegant curvature allow visitors to have a amazing view on Sarawak River, Kuching cityscapes by the Kuching waterfront and various other landmark around it. It also feels appealing as it curve according to the gentle curvature of Sarawak river, and it matches the curve design of Sarawak State Legislative Assembly building. Alternatively it also resemble ‘S’ of Sarawak. The opposite inclined A-shaped tower: To allow a wider clearance for shipping route below (without the need of mid-river supports) and reduce the vibration when many visitors walking on the bridge causing nauseated sensation, the tower is purposely opposite inclined to provide the greatest balance of weight, tension and pedestrian-induced vibration control.

On each of the in-river bored pile foundations, there is two load bearing inclined steel mast that converged at the top with an appearance of “A”. The inclined design also resembles the traditional Bidayuh Bamboo Bridge which features a stable bridge walkway supported by inclined Bamboo support on both sides. The hornbill inspired structure : Each of the top of the inclined tower have a sculpture resemble a hornbill head facing opposite direction which corresponding to the Sarawak River. It denoted the emblem of Sarawak. Visitors can get a nice view of Kuching City, Kuching Waterfront and Sarawak River from the Darul Hana Bridge. The spiral walkway: One unique feature of Darul Hana Bridge is the 360 degree spiral walkway with inclined slope. It is located at the first segment at the esplanade end.

The main bridge is 10 meters vertical above the water level while the esplanade is much lower than the main bridge. Creating a gentle inclined slope is a challenge as it will be required to be extended to existing esplanade. 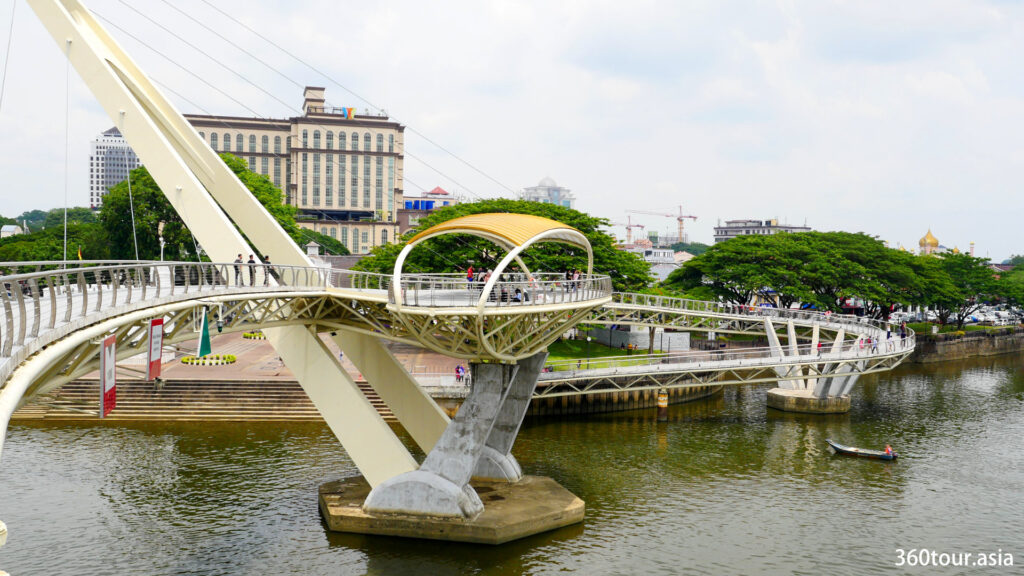 The elegant curve of the bridge and the spiral walkway

A 360 degree turn spiral walkway is created to bridge the gap, allowing wheelchair user to use the bridge and pedestrian to cross the bridge with less effort.

The spiral walkway is supported by 9 outward inclined pillars in a semi-circular pattern from a in-river piled foundation, which have an appearance of 9 fingers. The 9 pillars represent the 9 pointed star in the Sarawak state flag, which also represents the 9 division of Sarawak (year 1988). The spiral walkway of Darul Hana Bridge allows visitors to get on to the main span of the bridge. The inclined slope to the main span of Darul Hana Bridge.

At night, the Darul Hana Bridge is lit up with sequential color changing light that changes color every 10-20 seconds. It appears to be alive at night with the color change and having a amazing reflection on the Sarawak river. During normal nights, the bridge is lit up with color changing lights, however in conjunction with the World Heart Day 29th September 2018, the Darul Hana Bridge and Fort Margherita is light up in Red. 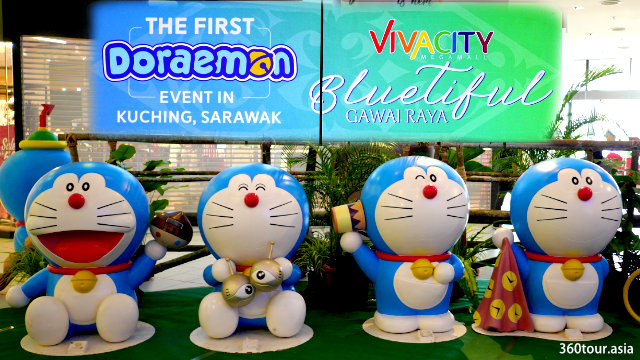