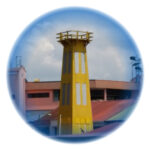 The Tower Market derived its name from the remnant tower belonging to the Old Kuching Fire Station which was built in 1946 at Jalan Gartak during Sir Charles Noble Arden Clarke, the first Governor during the British colony administration. The site of Old Fire Station was formally a tidal creek known as Sungai Gartak which was reclaimed in 1899. The Old Kuching Fire Station was demolished in the fifties except for the tower which still remained until today. Later the site was used as an open air hawkers market selling various type of foods mostly owned by the Chinese hawkers. The construction of the roof over the open air dining area was carried out in 1971.

(adapted from the inscription plate placed below the Old Observation Tower of Tower Open Market.) This metal inscription plate was placed below the Old Observation Tower of Tower Open Market. The view inside the Tower Market, showing the huge cement structure (bottom part of the remnant tower building) with the inscription at the left.

The “Old Observation Tower” PokéStop at Tower Market Kuching, which is famous for its hawkers market, serving many local delights and delicacies. Mainly of the stalls here are Chinese, serving assortments of local favorites such as Kolok Mee, Pork rice, Sarawak Laksa etc. The Electra House Shopping Mall is just opposite the street, which is famous hangout location for local teenagers, and families, selling mainly budget merchandise. This Triangular market is surrounded by many traditional shop houses, selling basic needs and local goods.

The Yellow Concrete Tower with interior stairways connect to the small top open platform allow people to have a better view of the city skyline view from the higher ground. Most of the older shop houses are a storey shorter in height than this tower allowing this tower to be a perfect spot to look for fires outbreaks (Previously a Fire station). As taller buildings are start to build around it, the tower looses its function as a watch tower. Currently this decommissioned tower no longer act as a watch tower, but a relic to remember the past. Visitors is not allowed to use this tower to visit the top. The Old Observation Tower pokestop at Tower Market Kuching as shown in the map in Pokemon Go game.

This PokéStop is famous for farming as it is close proximity to other nearby pokestops which is within walking distance, activating Lure in all nearby pokestops can create a spawn frenzy. There is no overlapping in spawn radius, however a short walk might help in getting mileage reward in hatching your eggs in the incubator or reward from your buddy by walking them with you.

This stop is famous for spawning Psyduck, Dartini, Slowpoke and Magikarp, among other common spawns like bunch of Ratata, Spearow, and Pidgey. The Old Observation Tower Pokestop is one of the famous pokestop for farming due to close proximity to many nearby pokestops which is within walking distances.

The “Old Observation Tower” Pokestop is surrounded traffic, hence be always aware of your surrounding while wander and catch. At peak hours, traffic here can be slow till a stand stills. The Radius of this Pokestop includes most part of the Tower Market, and part of the entrance of the Electra House. Occasional bunch of poketrainers sitting at the short stairs in front the shopping center and play pokemon. However a better option is to have a sit at Tower Market and have a relaxing sip of drinks and enjoy local delights with friends and family, while catching Pokemons.

At night, this area turns into a spawn frenzy as may pokestops nearby are Lure activated, create a beautiful scene of pink falling sakura flowers in the Pokemon Go game. It is typical to become a crowded place at night as many poketrainers around wandering and catching. There will be also atypical late night traffic jams due to many playing Pokemon Go from the comfort of their car air-conds (Let’s say only the passengers who is playing). It is a chargeable offense if you use handphones (playing games, sms, messaging, talking through phone.. except handsfree) while driving. A close up view of the “Observation Tower” The Tower Market is in front of the Electra House shopping center. The panoramic view of the hawker stalls inside the Tower Market.

The Panoramic View of the Tower Market with the Electra House at the left and traditional shop houses at the right.

The Old Observation Tower PokéStop is one of the famous PokéStop for major farming due to close proximity to many nearby PokéStops which is within walking distances. At night many youngsters wander around walking or in the car catching pokemons, with many Lure activated PokéStops around creating a Spawn Frenzy. Do enjoy local delights with friends and family while playing Pokemon Go here. Be careful when you are near the streets.