Day Before the Pesta Benak

Sri Aman Downtown Benak Carnival and Bazaar on 13th October 2016. The night before the festival, many stalls and booth are set up along the Sri Aman Downtown streets. There are Booths selling foods, shirts, ornaments, decorations, traditional costumes and musical instruments. There are also game and entertainment booths. Preparing for the Tidal Bore Festival, the landmark twin dove statue roundabout was upgraded and repainted.

A closer look at the twin dove statue. Notice the amount of swallows resting on the power wires.

Every year the statue is repainted. Previously the twin dove sit on a maroon ball, recently the ball was repainted into black colored. Incidentally, this statue is also a PokeStop in the Pokemon Go game. Some might think the black ball mimic the UltraBall in the Game.

The “Bazar Ria Benak” along the Sri Aman Downtown streets.

The owner of the stall selling Roti John. Thumbs up sir.

Another view of the stage.

Experience the Virtual Reality at the Capsule from KusoVR.

The Game Booths with display of emoticon emoji pillows.

Visitors and tourist from near and far come to the Bazar Ria Benak. 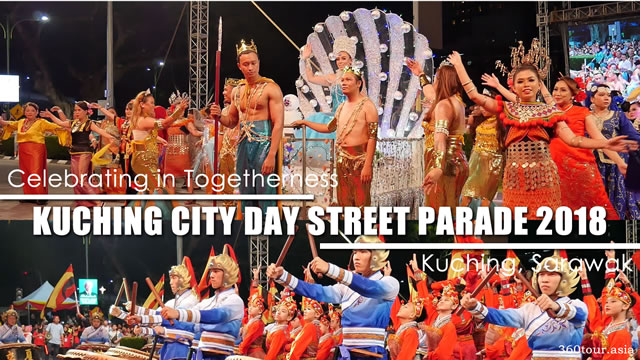