This is still a rather safe PokéStop where you and your friend can enjoy catching Pokemons while shopping at the same time, just be careful not to drive and catch and always be alert of your surroundings.

The “Boulevard Water Features” is a series small row of water fountains in front of the Imperial Hotel Grand Lobby (which is also part of the Boulevard Shopping Mall Kuching first floor). There is Nine main direct upward spurting fountain and nine smaller angled fountain. It is said fountain at the front door bring fortune and good luck to the bearer of the Hotel, as it was strongly related to Feng Shui and moving Qi (energy) in Chinese Culture. Nine is also considered a Lucky number, and the total number of eighteen also forms another Lucky number. The Water Features in front of the Imperial Hotel Grand Lobby

The water features surrounded by pavement for pedestrians and Hotel guest drop off. In front of the features are series of national and state flags. A level below it is the road linking to the entrance of basement car park. A close up view of the water fountain.

This PokéStop is located at the front lobby area of the Imperial Hotel, is an outdoor water features that warrant caution while wondering around as the pokestop spawn radius is accessible to the people at the busy one way road of Jalan Datuk Tawi Sli and the crowded junction of Jalan Hup Kee. Always remember to aware of your surrounding as you wander outside the shopping mall. The water features and the row of flags. Be careful if you wander around the balcony as risk of trip and fall over to the busy road below. Another perspective view of the water features.

With all the potential risk involve, the best option is play indoors. The water features is at the main entrance to the grand lobby of Imperial Hotel. You can comfortably grab a sit at the lobby waiting area and enjoy the game play air conditioned. Since this PokéStop radius also reach further into the shopping mall, you still can enjoy shopping while playing.

Another option is catching Pokemon in the comfy of your hotel bed, as this PokéStop is also accessible to Imperial Hotel guests.

Click the below link to view 360 image of the boulevard water features.

There is many nearby PokéStops within walking radius in the mall and you can get good overlap of PokéStops and hence good for farming of items and pokemons. Do try to activate Lure in all these stops. Once all are activated, you will emerge in the pokemon spawn frenzy.

The nearby PokéStops are: Try to Activate all nearby pokestops and forms a pokemon spawn frenzy within walk distance. The Pokestops within reach of Boulevard Shopping Mall Kuching 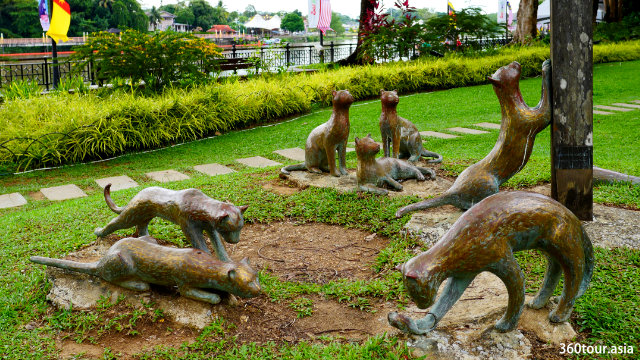